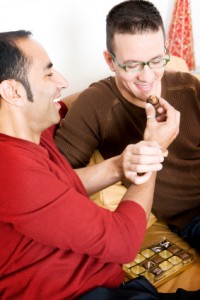 In times gone by flirting with gay man was much more difficult. The gay community was mostly forced underground and had to hide their ‘little secret’ from the world. They had to develop little nuances and ques. These gave other gay men the knowledge that they were part of the same ‘club’ so to speak.

During the Victorian era, Gentlemen’s Clubs were popular amongst the middle and upper class and going to the club after a day at the office was commonplace. Soft comfy chairs, open fires, a glass of whisky and newspapers would await the men as they entered. Flirty conversations would then take place over the top of the daily broadsheets.

Later, in the 1970’s and 1980’s small signals were developed which gave other gay men the hint that it was ok to flirt. The single earring in the left lobe and the handkerchief in the left back pocket of the jeans were both signs of ‘solidarity’ within the unspoken laws of the silent population. Now, however, despite the prevalent prejudice that still occurs within parts of the straight community, open gay flirting is commonplace.

Gay Pride has opened the doors to couples wanting to share their love openly by holding hands and kissing in the streets to flout this very prejudice. Many bisexual and bi-curious men find this an easy way to get out and meet other guys.

Flirting With and Meeting Gay Men

Meeting a new person in a gay bar or for a first date can feel quite scary and yet exciting. Your eyes meet eyes across a crowded bar and there is that split second of soul recognition and the eyes twinkle with that sexy sparkle. Flirting can be a thrilling way of pulling that person toward you. Flirting is not only a form of self-expression but also a way of letting them know you are very interested in getting to know them.

You can begin by wiggling an empty glass in their direction and hinting that you wish to buy them a drink. Smile and show them you want to chat. Entice them over to you and call them sexy.

Being flirtatious doesn’t necessarily mean being ‘slutty,’ so keep the flirting to a safe level. That old line of ‘do you come here often’ has probably run its course. Instead ask other leading questions like “Are you here alone or with friends?” or, “Are you here with your partner?” Or, you might ask, “Is it ok to buy you a drink?” You can even try something a little cheeky like “Your gorgeous eyes are like magnets to me and I would really love to buy you a drink so I can look into them a while longer.” Yes, it’s corny maybe, but flattering nonetheless.

If you are in a gay club or bar you are probably going to be in the right company to flirt with most people. They will all very likely be gay and equally flirty. Although, that is not a given, so do try to watch the person a little before you hone in on them. See who they are with and how they behave toward anyone they might seem close to. It could be a partner or someone’s feet you are stepping on if you try to flirt.

Use Humor to Good Effect

Show a little humor but keep it clean unless you know that person just a little. If you have already been introduced or they are a long-term acquaintance you might have a better opening. You can be a little risqué if you know their sense of humor, but if not, stay appropriate to the situation and use language that will not offend.

Touch is a very informal way of letting someone know you are interested in them. By touching their arm a little when you chat, you are giving them signals that they are attractive to you, so reach out a little once in a while but don’t be over pushy with the laying on of the hands. Smile frequently but not obsessively. Show a happy disposition and a light-hearted manner.

Let the conversation and interaction go where it may. 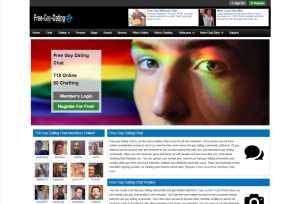